I’ve written before about the Tam Ky Art Village, which was a collaborative project between artists in Korea and Vietnam. I still believe Tam Ky is worth a visit; I took my brother and cousin there last year. Besides visiting the art village and the biggest statue in Vietnam, you can experience small-town Vietnam off the well-worn tourist trail. But if you wanna check out some cool local art without making the trek down to Tam Ky, Da Nang has it’s owe “mural alley” of sorts called the Da Nang Fresco Village.

The entrance to the alley is not so well marked and quite easy to miss. It’s at 75 Nguyen Van Linh, and that’s “new numbers” since it’s on the new section of the road. See, when the government extended Nguyen Van Linh in (I believe) 2010, they renumbered the houses. But as is common in Vietnam, many people were emotionally attached to their old number and refused to change. This resulted in the strange “old number, new number” dual address system found on this street.

There’s the official sign to welcome you when you first walk down, and after that, you pretty much just wander through the different branches of the alley. There were a couple of smiling people milling about, and one or two coffee shops that I’d like check out later, but it’s all about the journey here.

The different murals come in a variety of styles. Some are quite cartoony, while others are a bit more natural looking. It seems like whoever organized it just carved the walls up into different spaces and let the artists have free reign. I really liked the massive “Tôi Yêu Việt Nam” piece.

Did you get a chance to visit the Da Nang Fresco Village? Which one was your favorite? Let me know in the comments! 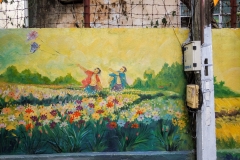 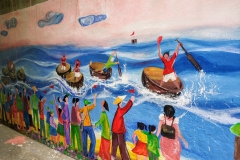 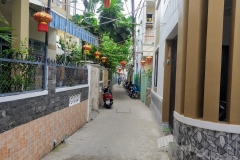 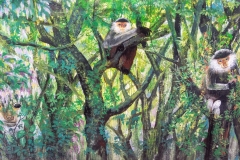 Glad to see you promoting this Shaun.
As you now know it is well worth a visit.
I will be re-visiting it next year to see any changes.